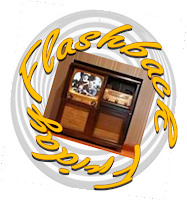 Time to go back in time thanks to fun old family photos of days gone by.  Growing up in Southern California, Disneyland was a popular destination for our family.  Sometimes we were there just the four of us, other times with extended family members.  Oftentimes my brother and I would get to go for school or church incentives, or as awards for a successful sports season with the teams we played on.  Trips with friends, or friends families were often the case as well, and as we became teenagers, the park was a popular destination to hang out.

Since moving to the midwest, I don't have the good fortune to get to visit my favorite place as often as I would like to any longer, but every chance I get I'm there and have a GREAT time.  My personal library of Disneyland photos numbers in the tens of thousands, but the vast majority of those are from my own adulthood, not my childhood, and certainly not before I was born.  But I definitely enjoy seeing all of the old photos of Disneyland - especially from the days when Walt Disney was alive. 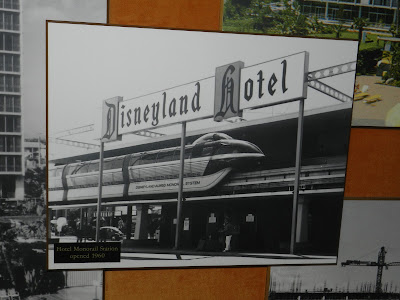 I snapped this picture of a picture at the Disneyland Hotel on my last visit to the Disneyland Resort in 2012.  It shows the Monorail arriving at the Disneyland Hotel station which opened in 1960 when the Monorail line (which opened in 1959) was extended across West Street (now known as Disneyland Drive) from the park to the hotel.  The extension took great care and required special permission from the city and county as it took the Monorail out over a working public street - Disney's innovative thinking and push for progess at work!  The station,  was the first link for hotel guests to get directly to the theme park, and provided transportation directly into the park via the Tomorrowland Station.  Other options included taking the courtesy tram or simply walking across the street and through Disneyland's parking lot.

Posted by Let's Adventure! We Can Show You The World! at 7:29 AM No comments:

It’s time once again to take a look at inexpensive options in or around Walt Disney World to augment your vacation experience.  Things that you might do on your own or with your traveling companions that are FREE or close to being free. Today we'll take a look at finding adventure and enjoyment in the Disney Transportation network.

As the Walt Disney World Resort is a vast tract of land – nearly 43 square miles of fun – getting around is not quite as easy as simply walking to your favorite destinations.  And since the Resort is a vacation destination for many visitors from around the country, as well as around the world, personal cars often are not involved in a Walt Disney World vacation.  Many visitors to the resort choose to or have to fly just to get there.  So the Resort offers an array of FREE transportation options.  Buses, boats and Monorails are the opportunities provided for getting around within the Resort. All of these options are available to any guest, even if just a day guest visiting a theme park, but looking to move between locations (say for moving between theme park and non-theme park based dinner or dinner show).

But the transportation network does not simply need to be viewed as transportation.  On many visits that I have made to “the world”, I like to sit back and use the available modes as part of the fun.  Hop on a bus and just go along for the ride.  People-watching can be an interesting way to pass the time.  On solo trips that I have made, when I have no set agenda, I love to play “bus roulette”, and just hop on the first available bus, and go until a destination appeals to me.  It’s true there is a sense of “need” to plan elements of your vacation, but that same vacation just becomes a chore when you are slave to a set, pre-planned to the nth detail schedule.

Ride a Bus!  Buses make up the largest portion of the Walt Disney World transportation network.  The Disney fleet is vast, with buses transporting guests between every resort and the theme parks, water parks and the Downtown Disney area.  Routes are often combined as very few buses offer a single-purpose route (the Animal Kingdom Lodge to the Magic Kingdom is a single-purpose route), since many buses are shared between resorts and their primary destination (i.e. a bus might leave Old Key West, and make a stop at Blizzard Beach before going on to Animal Kingdom Theme Park; while others might leave the Wilderness Lodge, and make stops at the Polynesian, and Grand Floridian before proceeding along to Downtown Disney and Typhoon Lagoon).  While the buses go just about everywhere, they do NOT go between Downtown Disney and the theme parks.  If a guest wants to go to a theme park from Downtown Disney (or from a theme park to Downtown Disney), they need to get on the bus that will take them to a resort… typically the closest resort to the theme park in question, and transfer to either another bus or another form of transportation that will get them to the theme park.  (i.e. a guest going to the Magic Kingdom could ride a bus to the Wilderness Lodge and them ride a boat to the park; or a guest going to Animal Kingdom Theme Park could ride a bus to the Animal Kingdom Lodge and then transfer to an Animal Kingdom Theme Park bus).

Ride the Monorail!   What was once thought to be the “transportation system of the future” still is a very cool way to ride in style.  Sure during the early morning hours and the end of day times the Monorail will be very, very full with excited or tired guests – but throughout the day, it is just a fun way to explore.  From the Transportation & Ticket Center you can take the “Epcot” Monorail, and enjoy a few miles of high in the sky fun on the way to Epcot, with an inside the park overview of both Future World and World Showcase.  Or take the "Resort" Monorail which circles the Seven Seas Lagoon making stops at the Polynesian, Grand Floridian and Contemporary resorts.  You can get off and on at each of these resorts and explore if you choose, as well as at the Magic Kingdom, where if you aren’t entering the Magic Kingdom, you could explore the lagoon walk. It’s an easy way to orient yourself and get a look at the resorts and an overview of the Magic Kingdom.

Enjoy a Boat Ride!  There are a number of boating opportunities throughout the Walt Disney World Resort, which can be enjoyable any time of day, but particularly beautiful at night.  They can be a bit romantic as well.

From the Magic Kingdom area, there are boats that connect the Polynesian, Grand Floridian, Contemporary, Wilderness Lodge and Ft Wilderness resorts with the Magic Kingdom.  Any of these are available to you, and you could easily cruise the Seven Seas Lagoon and adjoining Bay Lake.  The boats operate continuously throughout the day from shortly before the Magic Kingdom opens until shortly after it closes.

From the Epcot area resorts, the Friendship Boats cruise Crescent Lake and the adjoining canals making stops at Epcot, the Boardwalk, Yacht & Beach Club, Swan & Dolphin and Disney’s Hollywood Studios.  The loop is continuous throughout the day from shortly before the theme parks open until shortly after the theme parks close.  Get on and off as you please, exploring the resorts along the way.

From the Downtown Disney area, boats cruise Lake Buena Vista visiting Old Key West, Port Orleans and Saratoga Springs resorts.  Each is a separate line, but all provide beautiful vistas and the opportunity to visit and explore the resorts.  There’s also a West Side to Marketplace boat that operates strictly within Lake Buena Vista taking guests from one end of Downtown Disney to the other.  These boats operate continuously throughout the day, typically from about 10 am until 11pm at night.

While it’s true the Walt Disney World Resort is vast, and getting between destinations can and does take time, getting around doesn’t have to be considered a chore.  It can be a fun part of the adventure!!  The best part about the above options is that they are all FREE, and if you are a resort guest visiting theme parks - will help you skip the theme park parking charges!


In preparation for the scheduled fall opening of Walt Disney World's second theme park, EPCOT Center, the monorail line is extended from the Ticket and Transportation Center to the new theme park.
Posted by Let's Adventure! We Can Show You The World! at 7:00 AM No comments: