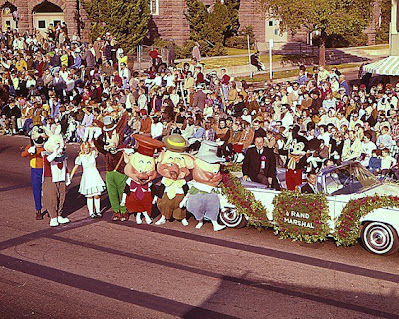 Walt Disney presided over the 77th annual Tournament of Roses Parade as Grand Marshall, riding alongside Mickey Mouse in a  white Chrysler Imperial as they drive down Colorado Boulevard accompanied by numerous costumed characters walking alongside and behind the vehicle.

January 2, 2012 - Pasadena, CA - The 123rd annual Tournament of Roses Parade will kick off at 8am PST (the parade never runs on the 1st when the 1st falls on a Sunday).  Be sure to watch this beloved tradition starting at 8am PST!  It is a wonderful parade - like Disneyland is to theme parks, the Rose Parade is the "granddaddy" of all parades.
Posted by Let's Adventure! We Can Show You The World! at 7:16 PM No comments: