Skagway is such a wonderfully easy port to maneuver. A very short walk from the ship puts you right at the station for the White Pass-Yukon Rail station, but it's also just a quick walk into town and is of course looking very much as it did back in the 1890s the heart of gold rush days.
My excursion package was a White Pass train combo, which actually was the reverse of many of the ones that are readily available. Instead of taking the train first, for my group, it was a bus first, followed by the return trip on the train. We drove about 72 miles north of Skagway into the Yukon (my mind kept thinking of Calvin & Hobbes and "Yukon Ho!"). Shortly after starting up the mountain we encountered a good bit of fog - actually about 20 minutes of our drive was very hard to see anything outside the bus, but thankfully after we'd crested the White Pass summit, we also left the fog behind us as the sun shone brightly.
We passed many beautiful lakes, streams, and some historic mining sites as we reached nearly 3,000 feet - but kept going. Along the way, we heard fascinating tales of how the gold rush came about, and how prospectors had some extreme conditions to face as they moved up from Skagway into the Klondike and the Yukon.
We enjoyed lunch near Carcross, Yukon, and there I got to meet Kenai and Fuzzy, along with other beautiful mushers. The dogs train in the off-season for the Iditarod at this facility in the Yukon. Since there's no snow in the summer, they use special sleds with wheels instead of runners and give rides to visitors. They LOVE to run, and of the nearly 90 dogs there, they all were seeming to bark out "pick me" as their handlers were selecting the dogs that would pull our sleigh. It was great fun, and I'm thrilled to have been able to experience it, as I doubt I'll ever experience the Iditarod for real.
After that, it was time to start trekking down the trails again, and we drove down from Carcross to Fraser, BC, where we picked up the White Pass train south to Skagway. Riding inside the car was nice, but honestly, I loved riding on the platform between cars for most of the way. It was awesome!
The scenery was spectacular as we passed through the Alpine Tundra, and then over the sub-continental divide, which separates the water flow to the Pacific down by Skagway, or way out west at the Bering Sea and down through the rainforest that is around Skagway. It was such fun, I'd love to do it again! It is absolutely a must-do recommendation for all my clients.
Best kept secrets/finds of the day? The arctic desert in the Yukon, and beautiful beach Lake Bennett. Whoo-hoo, some new sand for my "sands of the world" jar. 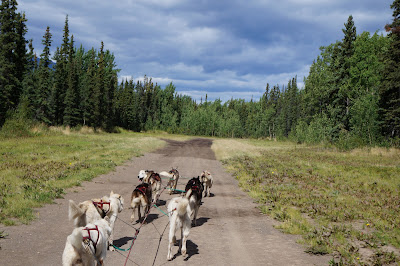 Posted by Let's Adventure! We Can Show You The World! at 3:36 AM No comments: