Golf With a View

How about some golf and incredible views this summer along with complimentary golf, greens fees, and transfers? There are some terrific inclusions available at Sandals in both The Bahamas and St Lucia. Check it out, and then let's chat to get you booked! https://tinyurl.com/GolfwithaView

Posted by Let's Adventure! We Can Show You The World! at 11:50 AM No comments:

Happy St. Patrick's Day!
What better way to spend this day than at Sandals Resorts, with unlimited amounts of your favorite cocktail at no additional cost! Book your Sandals vacation during their St. Patrick's Day sale and receive a FREE Private Candlelight Dinner for two when you book a Club level room or higher. Bottoms up!
#SandalsTravelAgent Posted by Let's Adventure! We Can Show You The World! at 2:03 PM No comments: 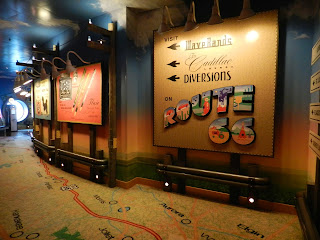 Attention to detail is one of the things that Disney is often cited for as one of the "Disney Differences" - not just in its' theme parks and resorts division, but also onboard its' ships of the Disney Cruise Line.  Check out this hallway from the Disney Wonder, found in the Route 66 area on Deck 3, an entertainment zone which houses 3 different lounges (WaveBands, Cadillac Lounge and Diversions), which offer various family-friendly activities during the day, but transforms to an adults-only zone after 9 pm each day. 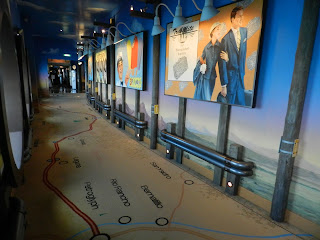 Not only are the walls painted to resemble the sky, and the various wall decorations resemble road side signs (which by the way are recreations of actual roadside signs that once graced the famed Route 66 from Chicago to Santa Monica, just west of Los Angeles), but the carpeting plays a big, important role as well.  You can literally travel from Chicago to L.A. by way of the floor!  The entire route and various surrounding communities is shown in the carpeting, ending at the Pacific Ocean.  So even onboard the Disney Wonder, you can essentially get your kicks, on Route 66! 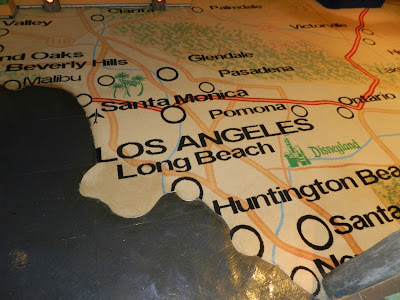 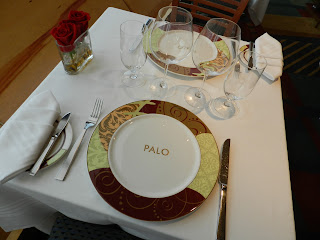 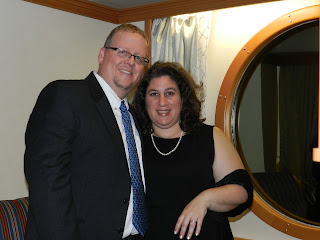 On our second night of the cruise, we were originally scheduled to dine in Parrot Cay, our regular rotational spot in the dining rotation, but instead we had dinner at Palo, the adults-only restaurant onboard the Disney Magic (and replicated on the other ships in the fleet as well).  We, well, at least I, had heard and read a lot of the hype about the restaurant, and kind of knew what to expect.   We were ready and willing to see what it was like, and to be wowed.  We knew that we needed to dress, and night two happened to be our itinerary’s “Formal Night”, so we just wore to Palo what we would have worn to Parrot Cay anyway.  We saw no need to alter our plans simply because we altered our ultimate table location.

On the Magic, Palo is located on Deck 10, aft, or the very back of the ship, on the upper-most “real” deck.  (There IS a Deck 11, but it’s inside the pretend smoke stack housing VIBE, the teen club area).  Our table was in a lovely location, just slightly off-center from the very back of the ship.  As we sat enjoying the sunset, the one thing that I certainly would have preferred about the restaurant, was if the walking deck had been made to cross in front of the restaurant, rather than wrap around the back of it.  That way Palo could have truly butted up to the very edge of the ship, and would have provided unspoiled views of the ocean from the tables, vs. having the deck’s railing obstructing the view.

Despite the inability to secure reservations online prior to departure for this “highly sought after location” for anything but the very first night of the sailing, Palo was fairly empty throughout the entire hour and a half that we were there.  It was fascinating to watch as there truly were only about 6 other tables filled the entire time we were there.  This was just the first something about the hype not coming true during our dining experience there.

Given the very light attendance, our server, Nikola, was VERY attentive - even moreso than he most likely no doubt usually is.  He just kept coming around making sure we were enjoying ourselves, and that the food was good.  I counted  nine times when said “Bon appetite” to us.  Once, maybe twice would have been sufficient.  It was almost as if he were trying too hard.

To start we had a very nice, freshly prepared at table-side anti-pasti.  The bread selection that came with it was not exactly to our liking, but it was fun to look at (mostly of the hard, cracker variety instead of soft, sumptuous breads).

Neither of us could really decide what we wanted, but Nikola certainly had his recommendations.  For appetizers, I had the very delicious shrimp, and my lovely bride had a sumptuous  mozzarella rose (I didn’t get a picture of the actual menu insides, so I cannot remember the exact names of the various dishes we ordered).   For our entrees, I went with the ahi tuna, and she had lobster ravioli.  I also wanted the lobster farfalle, though I didn’t eat the pasta itself, just the big, very delicious piece of lobster.  The lemon sorbet that came in between the appetizer and the entrée was light, cool, refreshing, and oh so delicious.

For dessert, we definitely decided to go with the Chocolate Souffle (which does indeed have to be ordered prior to your entrée as so much of the hype indicates), and it was very good.  I am not a huge fan of dark chocolate, so I definitely toned it down quite a bit with the provided vanilla ice cream – even my wife’s portion of the ice cream, which she didn’t want.  If it hadn’t been for that, I would not have enjoyed that “chocolate bomb” – but with it, it was quite good.  I also added the vanilla and chocolate sauces that were provided, and had a wonderfully tasty dessert.

We are not coffee drinkers, (hot tea yes, coffee no), so coffee after dinner was not on our agenda – though my lovely bride did enjoy a cup of tea.  Nikola was sure to bring us the second round of the lemon sorbet, though this time it was not in a dish, but rather in a shot glass and infused with Absolut Vodka.  It was good, though I didn’t finish it all.  Not something that I would have thought to mix together myself, I must admit.

Overall, I will say that for us, Palo just didn’t live up to the hype from the internet board and guide books regarding Disney Cruise Line.  It was nice - very nice - but it just wasn’t “all that” that so much of the hype makes it out to be.  The food was great, but not worth the $20 per person upcharge (plus added gratuity) that we had to spend to eat there.  While slightly different, the food selection itself wasn’t that far off from the menus throughout the week that we enjoyed in the other dining rooms (as we discovered as the week passed by).  Overall, if I were to place the experience on a scale of 1 to 10, with 10 being a “must do again” rating, I would say our experience at Palo rated a 7.5.  It was nice, but not something that we just absolutely  “must” do again. 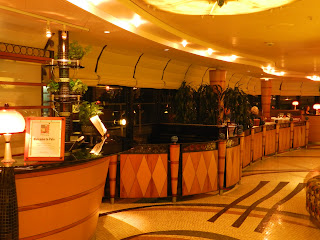 We had been able to secure a Palo Brunch, also something that is very hyped online, but after our dinner, with neither one of us being overwhelmed  - we decided we would just skip the brunch.  So on the way out of the restaurant, I asked the general manager what the brunch menu included, and then asked if we could cancel our brunch reservation.  He was shocked and instantly wanted to know what they had done wrong to upset us.  I assured him that they had done nothing wrong, and that we had enjoyed a delightful dinner, we had just changed our minds about brunch.  After a couple of minutes of convincing him that his staff had not offended us, he graciously cancelled our reservation.  On a future voyage, we have decided that we will try the brunch, but don’t really see a need to return for dinner. 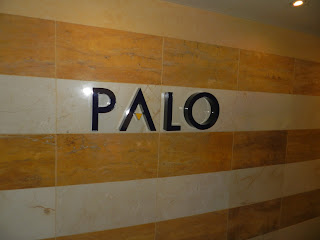 As with the initial entry regarding dining, I do have more to share, but once again will save those things for another entry.  So for now, as before, I bid you adieu, or as Mickey likes to say, see ya real soon!